In the United States, the towers of new wind plants often measure greater than 90 meters in height and the rotors themselves can extend another ~60 meters up. The tremendous height of these structures means that wind speeds far above the surface can impact wind generation. The ability to accurately characterize wind speeds at these heights is critical in order to estimate potential wind energy generation, to efficiently integrate wind plants into the electricity grid, to enhance grid reliability and resiliency, and even to design new wind plants themselves.

It is challenging and expensive to measure wind speeds at tower height (~90 meters), and publicly available data, from tall towers or remote sensing, is very limited. Therefore, researchers and practitioners commonly use meteorological models to characterize wind speeds at tower height and above. But, how well do these models work? Can they accurately characterize wind profiles, and what are their limitations?

A new study out of Berkeley Lab and the University of California, San Diego, evaluates three commonly used weather models for their ability to characterize hourly profiles of wind speeds (at tower height) across Texas. The study was published in the journal Wind Energy.

The analysis found that, by some metrics, these weather models performed well, and accurately represented hourly profiles of wind generation resources across Texas. However, the paper also identifies key areas in which the accuracy of these models is limited. Note, our results mostly focus on two of the three models we evaluated (ERA5 and MERRA2), as we evaluated the model HRRR over only a subset of the study period. 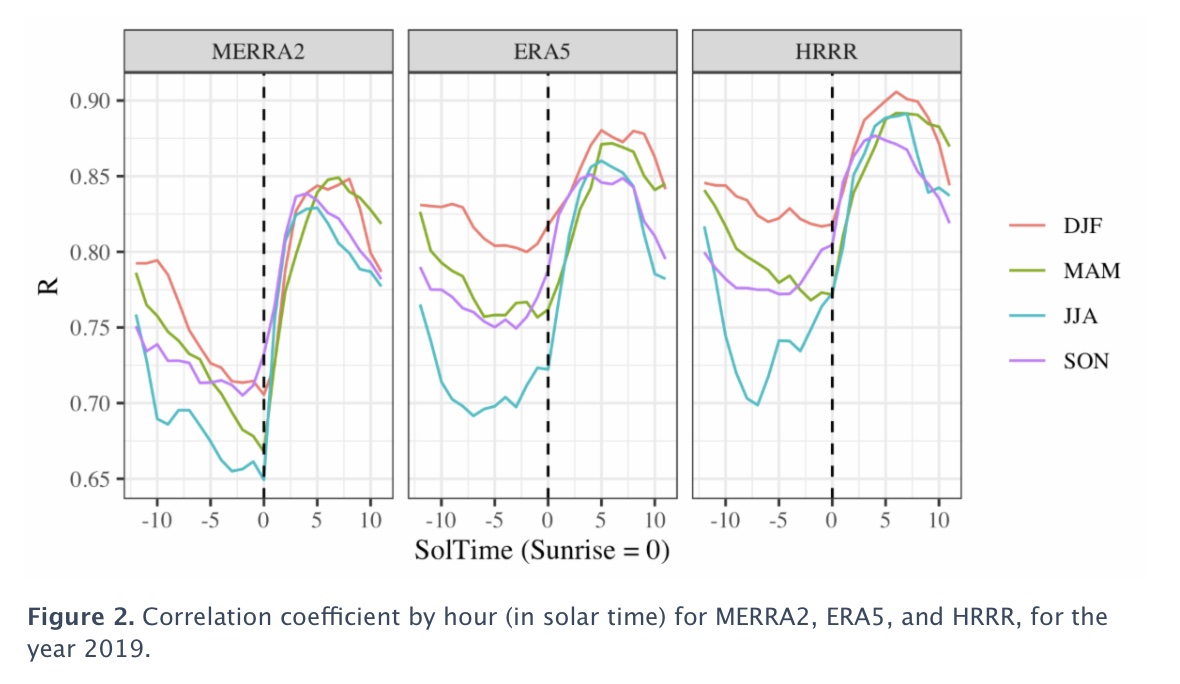 We hypothesize the decline in correlation between modeled and recorded generation during nighttime was due to misrepresentation of the atmospheric boundary layer within these models. At night, the boundary layer often shrinks to heights that would impact wind turbines. Additionally, the ability of models to represent certain meteorological phenomena during the nighttime, such as low level jets, may further degrade model observation agreement. Further research is need to confirm these hypothesis.

Increasing model resolution improves correlation metrics overall, but does not solve the issue of depressed correlation during nighttime.

Practitioners using these weather models to represent wind generation profiles should be aware of their limitations. Further analysis would be beneficial to determine how well these models represent wind profiles in other regions.

Finally, we note that this analysis is not of weather forecasts, but simply of meteorological models of real-time weather conditions. We expect error metrics to decline in quality with forecasts. Further research focused on forecasts is needed to determine their ability to represent hourly generation.

This approach is predicated on the assumption that there is much more uncertainty in the modeled wind speeds themselves than the conversion between wind speeds and output power. Our conversion of wind speed to generation was relatively simple and, while it did include the use of a plant-specific power curves, it did not account for plant controls, local variation in wind speed, wake losses, and other types of losses. If wake losses were less consistent during nighttime than other periods, it is possible this contributed to the diurnal patterns we observed. That said, wake losses are typically a small portion of annual generation (0 to 10%) and so it is unlikely they caused the type of model performance changes observed. Additionally, our approach cannot account for losses related to plant maintenance, or operational shutdowns due to weather (such as winter icing). However, the error patterns observed are not suggestive of these operational issues playing a major role. We note that had losses been included in the modeled generation, the models would have likely had small negative biases rather than small positive biases.

Another key limitation is that this evaluation applies to Texas region, but is not necessarily applicable to other regions, especially to regions with complex and/or mountainous terrain.