Langson Energy’s patent pending Air Energy Storage System (AESS) presents a total solution for generating and storing clean energy while conditions are favorable for producing energy from renewable sources such as solar, wind or pressure reduction. When more energy is generated than can be used, our AESS captures and stores that energy for later use with an adiabatic process. When there is a demand for low-cost renewable energy use during peak hours or emergency energy is needed, our AESS turns the stored energy into clean, low-cost, distributed electricity. The AESS stores energy by compressing air or gases through a dual expander/compressor or dual radial inflow turbine coupled to a dual motor/generator. This compressed, renewable energy is sent to an insulated storage vessel to store the pressure and heat from compression and then returns the hot air/gas back through the expander generator in reverse to generate electricity to supplement renewable power for use during peak hours, national defense and natural disasters. 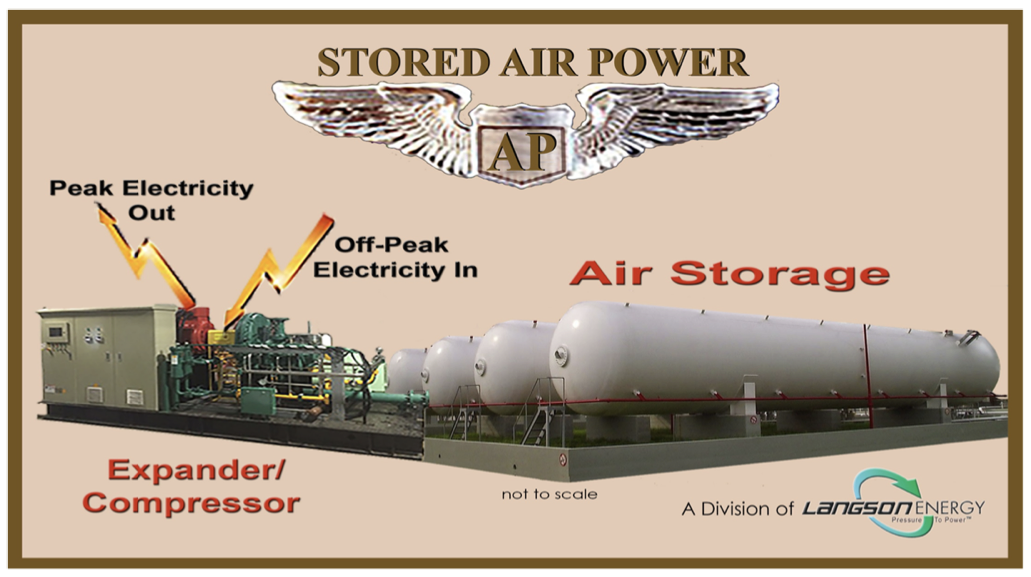 Today, the need for an efficient, low-cost energy storage system is paramount. Technology exists to generate renewable energy that is wasted in many ways. The cost of peak power can be staggering compared to cost of off-peak power. According to the US Energy Information Administration (EIA), 2017 average peak power can be as high as $144.39/MWh compared to the lowest average peak power cost of only $0.14/MWh.1 Thus, using low cost power during peak power times can save governments and industry billions of dollars annually. Even in the relatively low-electric cost state of Michigan, a University of Minnesota- lead 2017 study found that increasing the deployment of energy storage combined with renewable energy would help Minnesota meet its statutory goal of 80 percent carbon reduction by 2050 or sooner and at a lower cost than other technologies.2

There are long lists of compressed air energy storage (CAES) projects around the world attempting to store small to large quantities of energy for later use and the demand for solutions increases each year. The first utility-scale compressed air energy storage plant, Huntorf CAES Plant in Bremen, Germany, has been operational since 1978. It uses nuclear- sourced night-time power to compress and inject the air into two salt caverns of 310,000 m3 total volume. Another salt cavern project running in Alabama since 1991 is the McIntosh project which reduces fuel consumption by approximately 25% compared to the Huntorf CAES Plant. Langson’s AESS sets a new paradigm for CAES that improves the applicability for on-site distributed energy, increases efficiency and lowers cost of previous adiabatic energy storage systems. 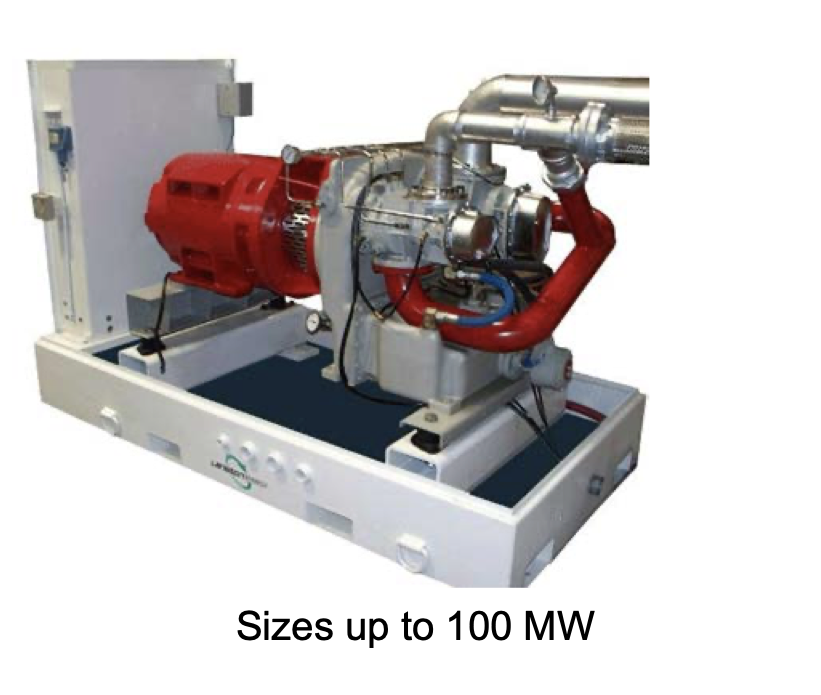 A method of combining a dual expander/compressor in one machine to compress air/gases and to generate power through a dual motor/generator from one unit lowers the cost and size of the system. 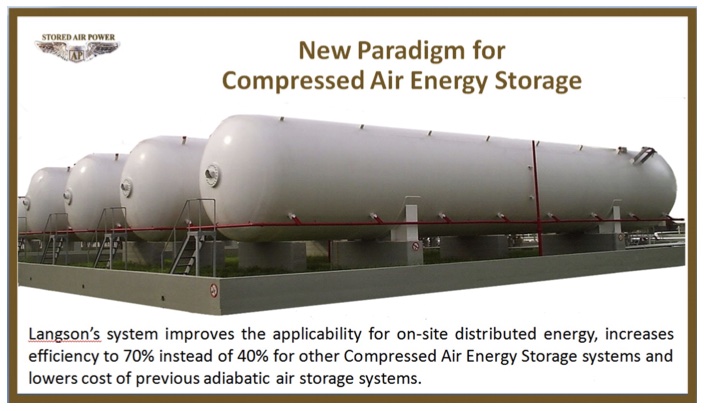 An air storage vessel will serve as a heat sink constructed of insulated storage vessels capable of withstanding pressures up to 1000PSI that may be either above or below ground. It is sealed with a waterproof coating and insulated to retain the heat of compression to be used to offset the Joule-Thomson cooling effect from the expansion of air during power generation in this adiabatic process.

Another key advantage of the AESS is the fact that it is distributed generation. Distributed resources not only provide benefits in the form of more reliable power for industries that require uninterrupted service, they improve the efficiency of providing renewable electric power. Transmission of electricity from large power plants to a typical end user wastes roughly 4.2 to 8.9 percent of the electricity.3 Distributed power also makes it possible for remote sites that are off the grid to generate clean affordable electricity. The use of on-site power equipment can enhance power security and provide consumers with renewable power at a higher level of reliability and quality at a lower cost.

In the stand-alone mode, Langson’s AESS can be used to power motors, air-conditioning, computing, lighting and other equipment needing electricity. Langson’s AESS is capable of a cold start (blackstart) and offers the flexibility to regulate grid frequency and the phase shifter operation. The need for flexibility arising from renewable energy fluxuations makes stored air energy a valuable alternative to batteries or pumped hydro storage plants.

As a result of our highly insulated hot-air storage vessel, our adiabatic system preserves a significant percent of the heat created by the compression process and stores this energy until it is released and expanded to generate electricity. Our patent pending adiabatic storage system achieves efficiencies of up to 70% as compared to diabatically stored power plants that are around 42% to 54% efficient.4

The Langson AESS attains the lowest CAPEX in the industry by the utilization of our
dual expander/compressor and motor/generator system coupled with the low-cost innovative insulated hot air storage dome, eliminating the high cost of expensive heat exchangers, storage tanks and liquid-pump systems.
Operating costs are at their lowest with the use of a single control system, low parasitic loads, hands- off remote monitoring and 40% less components.