The Inflation Reduction Act is the blow dryer, and our electric grid is a circuit without a breaker.

The Inflation Reduction Act is a massive $1.2 trillion jolt of electricity for the energy transition. While it encourages more renewable energy, carbon capture, and hydrogen production, the IRA also aims to turbocharge sales of commercial and personal electric vehicles and provide billions of dollars in economic incentives for the deployment of EV charging infrastructure. 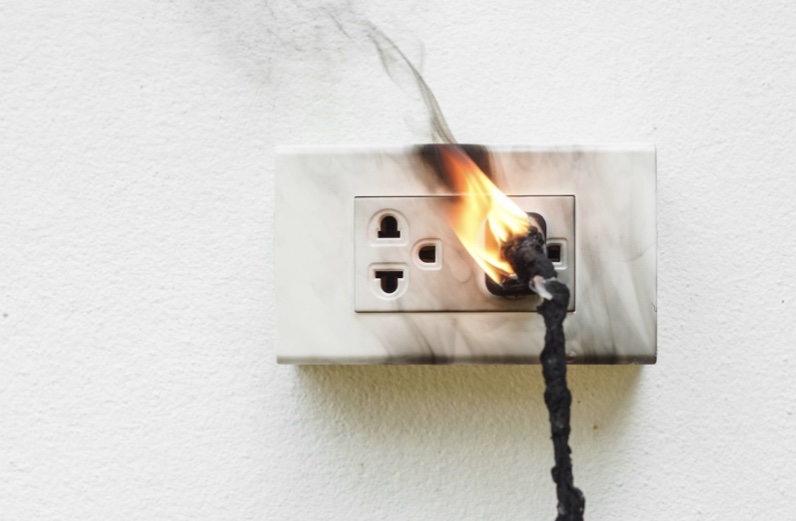 However, a jolt of electricity tends to fry a circuit without a breaker. If you've ever plugged in a blow dryer and watched your lights go out, you know what I mean. That's why we're hedging our excitement about this "high-voltage" event, fearing that IRA funding will short-circuit. Our electric grid is aging, under-resourced, and governed by complex regulatory bodies without mechanisms to move at the bill's intended speed. The IRA's billions will not address these issues.

Generally speaking, electrical panels in your home need replacement every 25 to 40 years. Grid operators aren't required to follow the same rules. Our existing transmission lines were designed in the 1950s, for moving power from a small number of large (mostly coal-fired) generators to a population that has since doubled. The average age of U.S. power lines is almost 50 years, with power transformers typically averaging 40 years. In addition, 90 percent of U.S. electricity flows through this aging equipment and onto at least 25-year-old distribution lines. Without a standard way to upgrade and expand this network, we can't add enough renewable generation to charge the increase of EVs coming off production lines.

In 2011, EVs made up just .001 percent of all new car sales. Ten years later, their share of new car sales had increased to 3 percent. It may not seem like much, but we're approaching an inflection point of 5 percent. Between 2011 and 2021, the U.S. built zero new transmission lines. By 2050, we must triple our transmission infrastructure to accommodate enough renewable generation to meet decarbonization goals, including increased EV charging. While the IRA allots up to $3 billion for transmission project development, it can take five to ten years to site, permit, and build new transmission projects. Similar to its EV provisions, this legislation sends a shock along an unprepared, under-resourced circuit.

More than 1,400 GW of generation, including at least 930 GW of wind and solar, is stalled in interconnection queues, awaiting the completion of utility impact studies. In 2021, the U.S. installed just 37 GW of wind and solar. If we continue developing at this pace, we wouldn't clear the existing queue for another 25 years — eight years past 2040 decarbonization goals. The typical wait time from connection request to commercial operation has increased to 3.7 years for projects built from 2011 to 2021, up two years from projects built between 2000 to 2011. 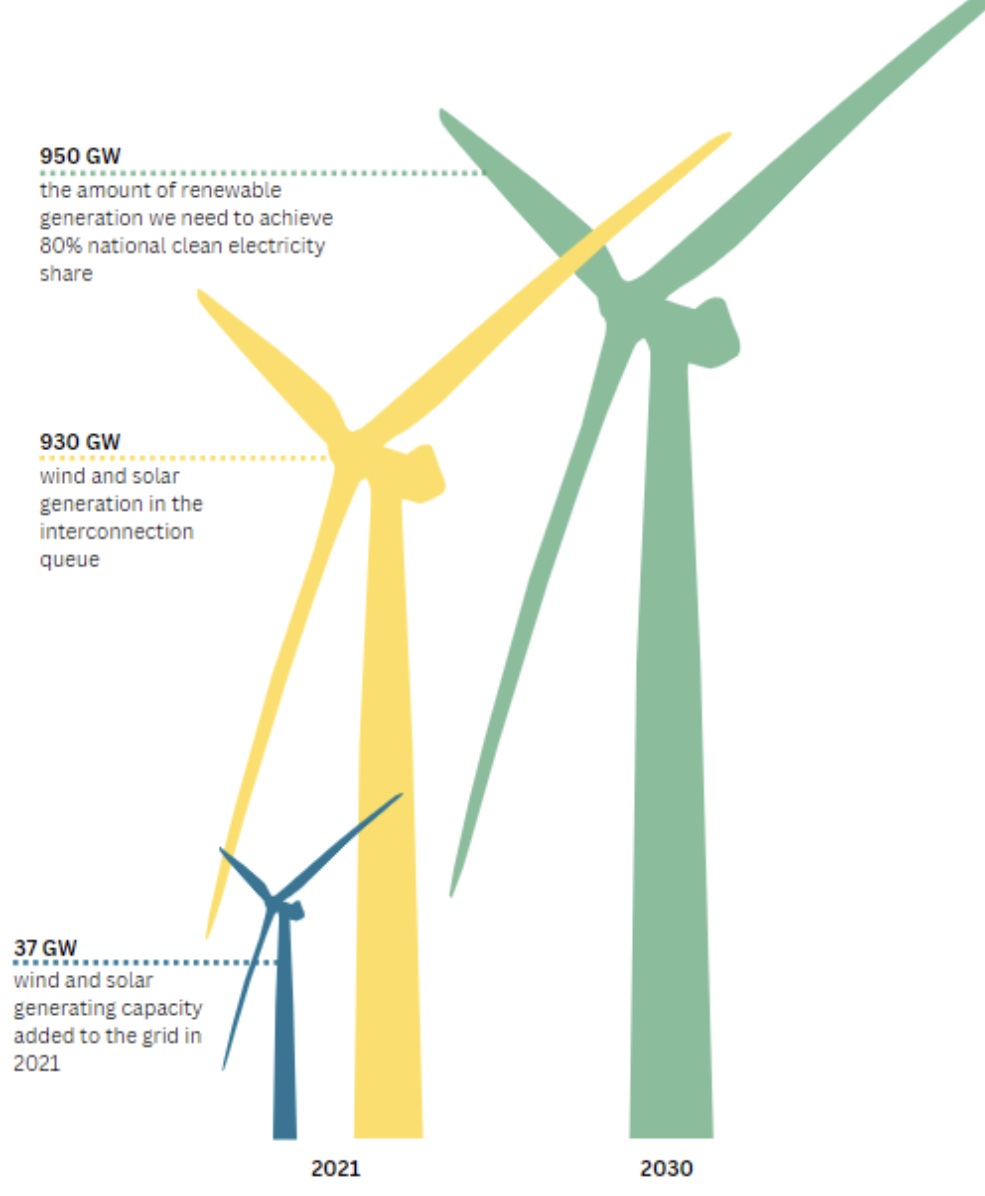 EV charging infrastructure projects can also expect to hear hold music. Interconnection alone for Level 2 chargers can range up to six months, while installers of DC fast chargers can expect to wait anywhere between six months and two years. Projects that need utility easements can typically add as much as another year onto that schedule. There simply aren't enough dedicated utility staff for EV infrastructure projects, an issue that is compounded by a lack of clear interconnection processes and timelines for each step of the process.

Let's say you're the operator of a 30-vehicle fleet. Utilities recommend that you have one charger for each vehicle. When you bought property to park your fleet, you thought about highway access, but now you're fueling your fleet with electricity, not diesel (a point well-made in the WSJ). Your fuel source is the power grid or on-site generation (solar panels). You'll need to acquire the equipment to charge your fleet, then connect that equipment to either the grid, on-site generation, or both. The IRA has done you well in incentivizing your purchase of EVs and that equipment, but you'll find your costs soar as time to build and operate your chargers increases because lead times for equipment will continue to lag alongside interconnection timelines.

If you're that fleet operator, you might, like us, be starting to feel less than optimistic about the IRA's ability to deliver on its promises. Don't worry, it's not 1879 - the solutions have already been invented.

The Federal Register contains many of them. Our circuit breakers for this funding could look like some of the following:

·     Fourth breaker: Capital providers need to get smarter and more flexible. A typical Venture Capital (VC) investment is characterized by short-term hockey stick growth from a handful of successful investments. However, infrastructure investments have a return profile that is focused on long-term, steady, fixed returns over generations. VCs aren't deterred - in 2021, they poured $18 billion into EV startups. Instead of hockey sticks, investors will need to understand the kind of bespoke capital structuring needed to finance complex assets and interconnection costs, a rare expertise in capital markets, especially to take advantage of Investment Tax Credits (ITC) where applicable.

We know what the breakers might look like. It's time to get them installed and to get $329 billion in exciting capital flowing.

Ethan Goldsmith is an Investment Partner at Keyframe Capital. He firmly believes the future is electric, across all sectors of the built environment. His passion, however, is the electrification of transportation and the broader implications of vehicle electrification on the electrical grid and other aspects of the economy. Ethan spent the early part of his career working with, and for, the companies driving the transition to electrified transportation. This includes stops working in consulting and working at Rivian Automotive. Ethan first worked as a consultant at Roland Berger supporting the firm's clients, primarily incumbents in the automotive industry, assessing the implications of vehicle electrification on their businesses. Just before joining Keyframe, Ethan worked for Rivian Automotive, supporting the early development of their commercial strategy. Ethan holds a Bachelor of Business Administration from the Steven M. Ross School of Business at the University of Michigan in Ann Arbor, MI.