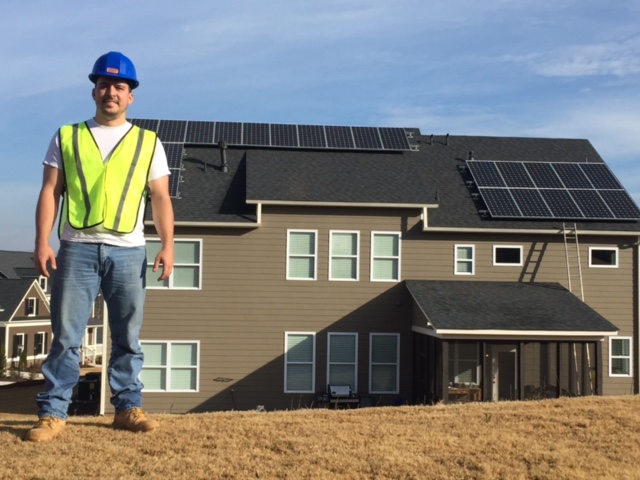 According to the Union of Concerned Scientists, sea level rise is the very predictable outcome of rising carbon concentrations in the atmosphere. They confirm the technology is already available for solutions to prevent global warming, and they point out the following key measures among several;
At the COP21 Conference Talks in Paris, the World Resources Institute stated if the world were to hold mean global temperature change to two degrees or less it must embrace Net Zero Energy by 2050; less than 35 years from now.
Voluntary program background
Beginning in 1991, the Environmental Protection Agency (EPA) launched a series of voluntary energy efficiency programs, Green Lights, and Energy Star Buildings, encouraging companies to invest in energy efficiency. In 2001, the EPA followed with the Green Power Partnership; promoting renewable energy to the same companies who participated in Energy Star.
These programs were successful in moving energy efficiency and renewable energy, but their separateness failed to uncover the natural synergies existing when integrating energy efficiency and renewable energy together.
Consider solar roofs shading buildings undergoing HVAC upgrades. The shading can be used to downsize the A/C equipment, improving payback economics. These, and other interactive effects have been documented through valuable research at the US Department of Energy (DoE) and the National Renewable Energy Laboratory's (NREL) Net Zero Energy Programs. Although these programs have demonstrated Net Zero Energy Buildings are now possible and more economical than ever, there isn't a national voluntary effort directed to entice organizations to pledge progress toward achieving Net Zero Energy.
Why zero energy now?
Early in the 1990's, environmental policy officers at major corporations recognized the value of a voluntary partnership with the federal government supporting energy efficiency. Each time a new voluntary energy program came along, these officers pledged their companies to the next goal from Energy Star to Green Power Partnership to Climate Leaders. Unfortunately, after fourteen years, many of these business leaders are retiring, and some fear the new crop of leaders, who are less familiar with the success of voluntary programs, may not be as willing to participate as their predecessors. And while waiting with no Net Zero Energy partnerships, opportunities to develop Net Zero Energy buildings are missed.
But there is still another very important reason why a Net Zero Energy Building Partnership is needed. The EPA is asking states to implement programs to reduce greenhouse gases under the proposed Clean Power Plan, and allows innovative voluntary efforts to count. A new national program could help the states receive credit in the plans they must submit to the EPA later this year.
Although recent emphasis at the EPA is on strengthening energy and environmental regulations, it should not be forgotten that voluntary programs have been equally successful at attaining environmental goals. If the EPA allows states to use voluntary programs to help achieve their Clean Power Plan compliance, it is important to have many new recipes for achieving an integrated energy approach guiding the states. The momentum brought on by earlier voluntary programs should be continued and capitalized upon to get Net Zero Energy into the mainstream now, especially as technology is rapidly helping make it all possible.
Finally, Net Zero Energy Buildings are being developed in other countries, separating the United States, which has the most invested in clean technology, from active policy where climate leadership is directing the deployment of clean technology, such as Indonesia, where the 99 story Pertamina Energy Building is billed as the world's first Net Zero energy skyscraper. And his Royal Highness, the Prince of Wales' Corporate Leaders Group has 16 EU companies committed to the idea of Net Zero Buildings.  Given the stakes, America cannot afford to give up energy and environmental leadership to other countries, whose own clean tech industries will benefit at her expense.
New technologies, lower costs for net zero
Solar energy's lowering costs, combined with new LED lighting technology, variable refrigerant flow HVAC, controls, and energy dashboards have set up a recipe of opportunity for economical zero energy facilities at unprecedented levels. These technologies have reduced the cost per watt by more than half to achieve zero energy. In 2001, it cost approximately $5.00 - $6.00 per watt for the necessary energy efficiency and solar investment to ensure a zero energy building. Now, due to tax credits and lowering costs of solar, one can achieve enough solar alone to offset energy use at a rate that is closer to $2.10 - $2.40 per watt. And, with new LED lighting, HVAC technologies, controls, and insulation, the costs are less than $2 per watt overall, a reduction of up to 65% compared with 2001.
This means taking a balanced approach to both energy efficiency and solar technologies. If solar costs were $2.20 per watt on a project, it wouldn't be practical to invest in energy efficiency costing more than $2.20 per watt saved. Instead, simply adding more solar would be the most cost-effective solution, even though other energy efficiency choices are eliminated. Likewise, if the solar investment tax credit (ITC) is eliminated in 2017, the cost of solar will be closer to $3.00 per watt, then the solution would be to invest in energy efficiency up to the $3.00 per watt saved range.
But clearly, energy efficient technologies which help reduce overall costs, such as LED lamps ($0.20 - $1.00 per watt saved), should be pursued relentlessly, as well as some envelope measures such as window films and improved insulation. New variable refrigerant flow HVAC can make the cut if downsized from heat load reductions benefitted from lighting and envelope measures. Finally, energy dashboards, which regularly prove to save 10 - 20% energy because of their real-time reporting, provide returns almost as fast as LED lighting.

Zero energy voluntary program call
The Federal EPA's focus on flexibility in implementing the Clean Air Plan suggests states and cities are in the best position to move in this direction. By calling for a joint partnership to achieve Net Zero Energy Buildings, US states and cities can take bold leadership, not only helping them achieve aggressive energy efficiency and renewable goals, but rewarding American clean tech businesses as well.
Since the COP21 meetings in Paris, the world is asking questions and taking action on Net Zero Energy Buildings. Isn't it time America did as well? Tybee Island and the southeastern coast can no longer wait.
Alden Hathaway is SVP for Sterling Energy Assets, a renewable energy development company. Under his guidance, the company is developing 13 zero-energy solar homes in North Fulton County, Georgia. Sterling Energy Assets is part of the Sterling Planet family of companies that promote renewable energy, energy efficiency, and carbon products for energy consumers seeking to reduce their environmental footprint.
Sterling Energy Assets | www.sterlingplanet.com