How Much Sun Do Your Panels Really Use?

Sunlight is fuel – especially for PV plants. As such, quantifying incoming sunlight is a core component of PV plant performance monitoring.

Typically, sensors like thermopile pyranometers and/or silicon reference cells are deployed throughout a PV plant to provide continuous, near real-time measurements of global solar irradiance. This data is then used to model the expected output of the PV plant, and calculate useful metrics such as the performance ratio.

Given the importance of solar resource data, significant research and development has been directed towards minimizing the uncertainty of these measurements. Today, the best Class A thermopile pyranometers can achieve measurement uncertainties of less than 3 percent.

One aspect of solar irradiance that is not typically quantified by PV met stations is its spectral distribution.  Conventional wisdom holds that, given the long list of uncertainties within a typical PV performance model, spectral effects are largely irrelevant, at least for silicon solar panels. Yet, research has shown that spectral effects for silicon PV can exceed 15 percent, 5 percent, and 3 percent, on an instantaneous, monthly, and annual basis, respectively (Figure 1). As PV plant analytics become more refined, the quantification of spectral effects increasingly stands out as an area ripe for improvement.

The sun is a multi-spectral light source, emitting photons in a characteristic spectral shape across a broad range of wavelengths, from the extreme UV to the far infrared.

As this light passes through Earth’s atmosphere, the spectrum is modified – different atmospheric components (air, water vapor, aerosols, and clouds) scatter or absorb different parts of the sun’s spectrum (see image), resulting in the terrestrial solar spectrum that we observe at ground level. Due to the variable nature of these atmospheric components, and the relative movement of the sun across the sky, the terrestrial solar spectrum can vary significantly over time and across different climates.

This spectral variability wouldn’t matter if solar panels absorbed all photons with equal efficiency, but they don’t. By design, solar panels absorb light across only a portion of the solar spectrum. Each solar panel product possesses a unique spectral response, determined largely by the type of solar cells it employs.

When you combine a spectrally variable light source (the sun), with spectrally sensitive solar panels, it’s clear how this can potentially affect modern PV performance monitoring.

Although spectral uncertainty isn’t routinely addressed at the PV plant scale, the research community has been deploying techniques to quantify and eliminate it for decades. In the 1980s, researchers at NREL published some of the first papers detailing the derivation and use of the Spectral Mismatch Factor (SMF). SMF was developed to help standardize and reduce the uncertainty of PV efficiency measurements by translating efficiency measurements to a reference spectral condition - the ASTM G173 spectrum, colloquially known as AM1.5.

This same technique is used to standardize the power rating of commercial solar panels to Standard Test Conditions (STC).

SCFs convert large spectral data sets into simple, intuitive data that can be easily used in existing PV performance models. Use of SCFs on a PV plant requires an effective, accurate, and reliable way of measuring solar spectral irradiance in the field.

Performance metrics are vital to the effective optimization of PV plant performance. There are two primary metrics where spectral correction can be applied to provide a clearer indication of plant performance:

In its simplest form, the PR compares the energy output of a plant to its maximum theoretical output, based on its nameplate capacity. Just as the PR can be corrected for temperature effects, it can also be corrected for spectral effects (via the introduction of spectral correction factors into the denominator).

Comparing the actual and modelled energy generated by a PV plant over time enables operators to check that the PV plant is performing as expected. Including spectral correction factors within the plant performance model reduces noise and improves the sensitivity of this metric, allowing performance issues to be identified and corrected sooner.

A number of options exist for quantifying spectral effects for PV plant operations:

While Class A thermopile pyranometers can provide accurate, unbiased measurement of broadband global irradiance (as detailed above) they are not capable of quantifying spectral effects. To compensate for this, various models have been developed that use inputs such as relative humidity and/or air mass to approximate spectral correction factors for specific types of solar panels. These relatively simple models often fail to capture all spectral effects.

Reference cells are essentially mini solar panels consisting of a single silicon solar cell. As such, they can effectively mimic the spectral performance of commercial silicon solar panels. However, they also possess the same degradation properties, which makes it difficult to decouple and track panel degradation over time.

Field spectroradiometers, designed for continual outdoor use, have long been used by the PV research community. Incident light is split by a dispersive element (such as a diffraction grating) into its constituent wavelengths and directed towards an array detector. Cost, performance limitations, and data load generally make spectroradiometers impractical for widespread deployment on PV plants.

More recently, the market has produced spectral pyranometers that provide accurate measurements of total global irradiance, like a thermopile pyranometer, while also using spectral measurements to quantify the effects of local spectra on PV panels. Automated subroutines can convert this spectral information into spectral correction factors for easy use within PV performance models. 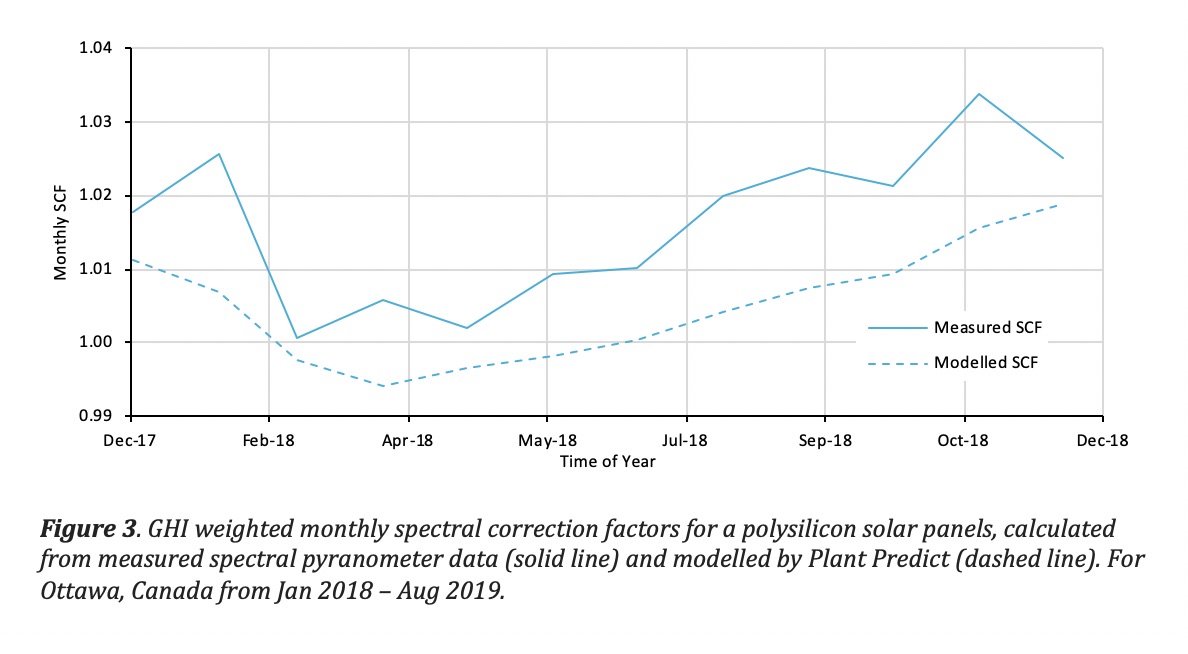 Richard Beal is President and CEO of Spectrafy Inc., a Canadian-based sensor manufacturer that has created a line of solar spectral sensors that enable routine spectral correction on PV plants.