Ciel & Terre in Germany: a Favorable Summer for Floating Solar

This summer, a new European country adopted floating solar and chose Ciel & Terre’s Hydrelio solution: Germany. The country is getting interested in the installation of this state-of-the-art technology combining sunray and water. The solar array, located on an Ossola’s GmbH quarry lake and developed by Erdgas Südwest, was inaugurated earlier in the summer. It was, in the meantime, the inauguration of an unprecedented anchoring system on a FPV plant…

Profile of the first floating PV plant in Germany

Ciel & Terre has breached in a new European market. Its flagship product Hydrelio arrived in Germany. Karlsruhe region inaugurated a 750 kWp floating solar array in July, which is expected to produce 736 MWh per year. The facility provides energy for the pond owner Ossola GmbH’s quarry machines. The excess of electricity produced is re-injected into the local grid.

The achievement of Maiwald FPV plant is the result of a fruitful collaborative effort between Ciel & Terre and German major energy actors. The mining company, Ossola GmbH, commissioned Erdgas Südwest, a EnBW subsidiary (one of the biggest German energy company), to develop and construct the project. Erdgas Südwest chose Ciel & Terre to fully design and supply the floating structure, including the anchorage, which installation was also handled by its experts. 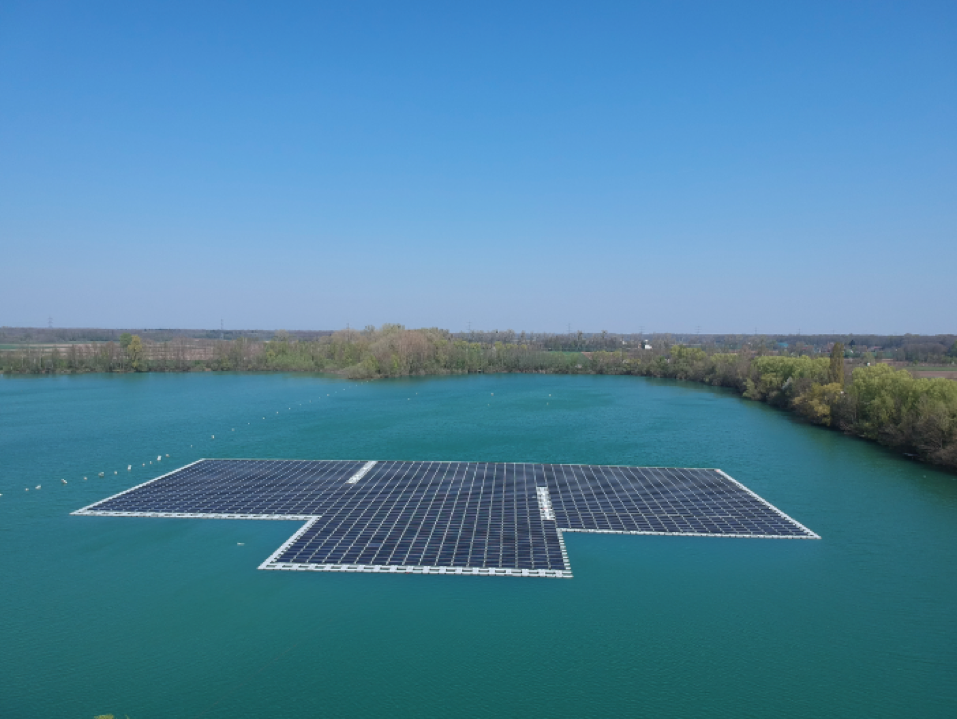 An innovative anchoring system for a challenging site

Owing to the site type – a 40 ha quarry lake – the installation of the floating PV plant was ambitious. Physical and operational constraints particularly questioned the usual anchoring solutions. Among them, gaps dug underwater with variable depths, up to 59m, and another hole planned to be made shortly. To solve this situation, Ciel & Terre issued an unprecedented anchoring solution worldwide: the first parabolic mooring line system. The plant is attached to the banks on three sides and its fourth edge is tied to a cable crossing the pond, which bonds opposite lakeshores.

Design, supply and installation, but not only

The specificity and unicity characterizing this anchorage have led Ciel & Terre to train and propose consulting on this world-premiere floating solar array with a parabolic mooring line. The group is actually widely involved in sharing knowledge with its interlocutors, as part of either the installation process or its training events.